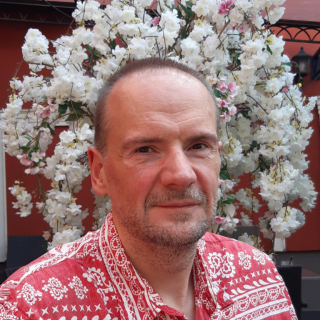 Density of chosen harmonic devices (quantity of degrees within) affects few crucial parameters of music: construction of arpeggio based melodic phrases, mix of prevailing intervals and force of functional gravity.

In seventh chords we observe denser texture and greater variety of intervals: seconds and sevenths become common, tritones are much more frequent. Functional gravity is the same, excepting dominant seventh chords – those pull even stronger.

Pentatonics also could be considered as vertical formations, with very dense texture. In such conditions fourths, seconds and their inversions start prevail. Functional gravity becomes weak. Looks like the vertical and horizontal of music got really close to each other. Some modes have no more than five harmonically stable tones (phrygian, for instance), all remaining act like passing or chromatic.

Next list shows how superimpositions could be categorized by density of texture: into triads, seventh chords and pentatonics. Pentatonics are marked in bold font; some of them are not common minor/major type and would be explained in further posts. 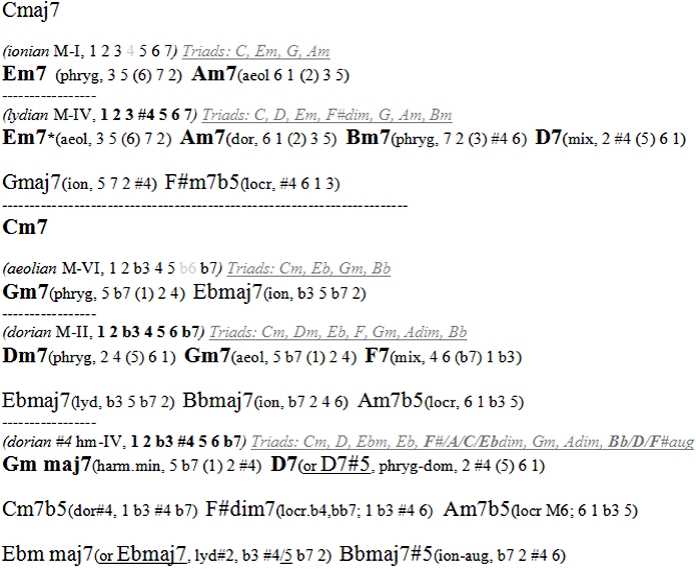 Pentatonic is powerful but yet underestimated harmonic device. I think it is because of limited intervalic structure of minor/major pentatonic (which lack some of characteristic intervals: m2, M7, tritone). Musicians are trying to alter pentatonics to fit whole range of musical structures, but they often fail to discover fundamental unifying principle. Hope I found simple and sufficient method how to overcome intervalic limitations of pentatonics and control them vertically. Great deal of upcoming materials would be entirely dedicated to this subject.

Did you ever noticed, when playing in a band or with backing track, that some of traditional chord substitutions do not sound well over original changes? There are reasonable answers why it is so, and what could be done to avoid such irritating effect, without limiting (and even expanding) palette of handy harmonic devices.

At first, let us define what traditional chord substitutions are. They are harmonic devices for creative reconstruction of already known chord changes, without doing any damage to their functional features. Chord substitutions developed gradually, as more and more sophisticated and modern recipes of harmonic variation.

We all know at least few of those:

Diatonic substitutions (Em7 instead of Cmaj7)

Root movement by minor third (Bb7 instead of G7 or Db7)

When using as melodic (arpeggio) devices, chord substitutions could work really well, if played in fast and convincing phrases. Predictably structured series of notes become relatively independent of harmonic context until the point of resolution. They are self content to the listeners` ear, because of very dynamic nature.

Audible conflict between original changes and substitutes occurs in slower tempo, when trying to accent or lean on notes of substitute arpeggio, also in chordal improvisation. It happens because some of chord substitutions have been created foremost as compositional devices and are not really suitable for vertical improvisation, because of avoid tones and chromaticisms (vertically unstable notes) they contain. Riddle of vertically stable and unstable substitutions emerged historically and I will propose clear technical solution for it in progress of series of following articles.

Once more: we could alter original chord changes using any of traditional chord substitutions and still retain the same functional logic, but we could not always do that during spontaneous jam session – original changes and their substitutions sometimes may not sound well, played simultaneously.

If these examples did hurt your ears (sorry for that), you are ripe for further studies, which will follow here shortly.